The start of our summerholidays in 2020 was in Raesfeld. We spent our first night here at the Wohnmobilstellplatz. It was just the perfect start of our holidays that summer in between two waves of COVID-19. 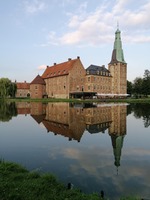 The Wohnmobilstellplatz was just a few hundred meters from the Castle and we had a very pleasant and easy walk in its tranquil forested 14 hectares surroundings. 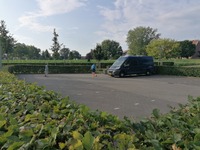 There are also some bars, restaurants and hotels with some very inviting terraces. Unfortunately, we had to resist them, because Kim is in the high risk group for COVID-19. But still, our glass was more than half full here. What a beauty and joy to walk here around Schloss Raesfeld and take some photos!!

The history of the Schloss Raesfeld dates back to the 12th century, but the castle has been rebuilt in around 1605 because its roof structure was burnt down in 1597. The east wall of the castle had to be rebuilt in 1614 because a storm had destroyed it.

It was just the perfect start of our summer holidays

After the end of the First World War, parts of a Bavarian division occupied the rooms of the castle in December 1918 and made Raesfeld a garrison for weeks. In March 1920, during the advance of the Red Ruhr Army in the course of the Ruhr uprising, there was a battle with the Loewenfeld Freikorps, in which 50 fighters of the Red Ruhr Army lost their lives.

The castle was renovated in 1922 and in between 1930 to 1932. Since Kurt Hielscher's photo has been published in 1924, I guess that the most remarkable differences, the higher roof and number of dormers, have been changed then.

At the beginning of the Second World War, Raesfeld became a garrison for almost 1,000 soldiers. Five years later, in the autumn of 1944, the Wehrmacht withdrew from the western front and parts of them moved into the castle again. Since 1942 the Castle houses the Akademie Schloss Raesfeld with the Crafts Academy to this day. In March 1945, Raesfeld Castle became the main first aid station for the Wehrmacht in retreat. The Red Cross sign on the roofs prevented major damage to the castle from Allied aerial bombs. With Operation Plunder near Wesel, the front moved within a few kilometers of Raesfeld until the British Army finally took over the castle on March 28th. The English military staff set up an office in the outer bailey, while families who had fled from the cities of the Ruhr area were housed in the main building and in the tower.

From April 1945 to March 1946, the knight's hall of the castle served as a prisoner-of-war camp for a company of Wehrmacht soldiers. In the post-war years, the castle buildings served as emergency accommodation for those who were expelled from the East and four classes from the Raesfeld elementary school.

In between 1950 and 1957 the damage from the Second World War was repaired. I don't know how severe the damage was?

Today there's also a small ZOO with a visitors center and a playground where our kids had some fine moments. The basement of the castle is used as a restaurant with a terrace at the other side facing towards the pond and the forest behind it. 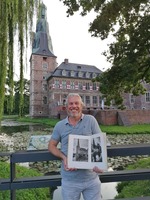 In the footsteps of  Kurt Hielscher