For me it all began here in Yugoslavia, or better said, The Kingdom of Serbs, Croats and Slovenes, the official name of the country at the time, when Kurt Hielscher published this photoalbum as an assignment of the government in 1926. Click on the map or here to see the exact places of the photos.

As a kid in 1985 and 1986 my parents took me and my sister to Glavotok on the island of Krk. I carry warm memories from these summer holidaytrips. The wars in the '90s made a big impression on me. It started with a clash near the Plitvice Lakes we also visited. In 1999 I went back with Kim on an interrail trip for the first time after the wars.

The years after we went dozens of times to all former Yugoslav countries. I started to study Eastern European Studies at the University of Amsterdam in 2001 and made a good start with learning the language.

View on Lake Bohinj and Vogel mountain where we went skiing, from Vodnikov Razgled, Slovenia, 16th of February 2018

Like Kurt Hielscher I also fell for the diversity of these countries, the mountains, the sea, the rich culture and history but most of all the hospitality of the people which always make a trip turn into an experience. Kurt Hielscher says that his photos prove that Yugoslavia for him "ein großes, reiches Erlebnis war," and promises that "... das wird es jedem sein, der mit offenen Augen durch dieses unberührte Land reist." I dare to make the same promise now, even 100 years later.

The book contains 192 photos but not a foreword but only from Kurt Hielscher himself.

Let me tell you a little more about our holidays in 1985 and 1986. We went to Autokamp Glavotok on the island of Krk. It took us a four day drive from the Netherlands with our Simca 1100 station wagon, with surfboard on its imperial, our Alpen Kreuzer folding trailer with Catyak catamaran on top of it, but the five weeks on Krk were always worth the drive.

I remember the sunsets, the lights of Rijeka sparkling during the night, a lightning storm diving from the Istrian mountains downwards hunting the sea towards the campsite.

Our little adventures along the coast, surfing, sailing with the catamaran to nearby small beaches, snorkelling whole days, dolphins passing by. At the time the campsite was rather primitive with two holes in the ground as a toilet with a huge plastic ton with water and a bucket to flush. In between 10.00 and 12.00 am we could get water from the pump behind the central house. It was a daily job for me and my sister to fill the jerrycans. With a trolley we brought the filled jerrycans to the tent and one was hung in a tree to be warmed up by the sun. This way, we always had a short but nicely warm shower to wash the salt of our bodies. Today the waterpump is still there, but not for use anymore.

Every few days we went by car to the nearby shop in Milohnići. We bought milk in plastic bags. Together with other fresh products we buried it in a hole in the ground and covered the sides with plastig bags to keep it cool enough and protect it for insects. The shop is still there. Only a few times we left our little paradise to go out for dinner to the town of Krk or Malinska dressed up in chique. 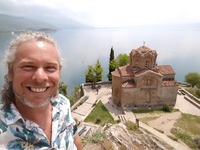 Those holidays in the late '80s we also went to Slovenia to for example Lake Bled and the Postojna Caves, but it was until the already mentioned interrail trip in 1999 that I also started to discover the other former Yugoslav countries. Since then we almost went every year, some years even several times, by campervan, car with a tent or plane to all other countries of the former Yugoslavia: Bosnia and Herzegovina, Serbia, Montenegro, Kosovo and Macedonia.

Here a small photocompilation. A more extensive compilation you'll find at the rubic "1001 other photos of the former Yugoslavia" on my Facebookpage.

In the footsteps of  Kurt Hielscher